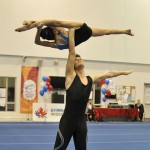 The 2012 Annual General Meeting and Technical Congress dates and location have been confirmed!  Mark October 26 to 28, 2012 on your calendars.

This year’s Congress will feature 2 days of education.  Sessions are provided on coaching, judging, business, preschool age, and fitness.  Attendees will also have the ability to learn from leading experts in a variety of fields outside of the 7 Gymnastics disciplines.