Posted on February 8, 2018 by Ekaterina Kharlip 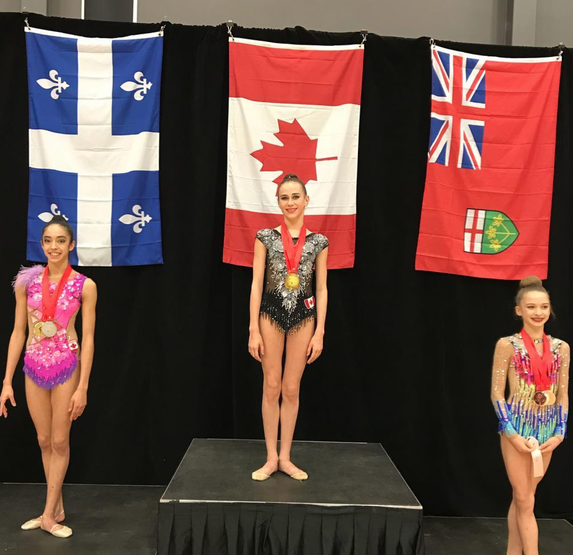 MARKHAM, ON (February 4, 2018) – Sophie Crane of Jusco RG and Michel Vivier of Viva RGC were crowned the new senior and junior all-around champions at the 2018 Elite Canada Rhythmic Gymnastics competition in Markham, ON on Sunday.

At the 2017 Elite Canada Rhythmic competition, Vivier finished second behind Natalie Garcia of Mississauga Newnorth RGC and once again this year, both women displayed phenomenal routines in the finals. Vivier finished the all-around final with 114.250 points, Garcia scored 105.200 for silver, and Izabella Helbin of Silhouettes of York RGC captured the bronze medal with 97.050 points.

Vivier also won gold on all four apparatus including a tie with Garcia in the clubs final scoring 14.050 points. Vivier scored 14.450 on hoop, 14.700 on ball, and 12.950 on ribbon while Garcia finished right behind Vivier on the remaining three apparatus.

“I feel good and I’m really excited because I worked hard to be number one,” said Vivier. “My routines were good today, I was really happy with all my catches. My next competition will be the Moscow Junior International Tournament in a couple of weeks, I’m excited and we’ll see how that goes.”

In the senior competition, Crane continued her dominance winning the all-around title with 112.300 points. Carmel Kallamaa of Glimmer Athletic Club and Athena Tsaltas of Kalev Estienne both finished in second place and Vivienne Motkine of Trillium Rhythmic finished in third.

In addition to her all-around victory, Crane added three gold and one bronze medal in the apparatus finals. Crane scored 15.500 on ball, 14.550 on clubs, and 13.700 on ribbon to win gold and scored 13.200 points on hoop to capture the bronze.

“This is my first year as senior so I didn’t really know what to expect coming into it. I’m really surprised and impressed that I finished first today,” said Crane following competition. “My first routine was a little shaky on hoop, but I was able to recover after that and the rest of my routines were strong and I’m happy with the results.”

“There were some very strong performances today, however it’s still early in the competitive season and our athletes know that there are areas that require focus,” said Teresa Orr, National Team Director for Rhythmic Gymnastics at Gymnastics Canada. “Being the third day of competition and competing four routines in one day, demonstrated who had stamina and focus today.”