Posted on September 17, 2018 by Audra Sederavicius 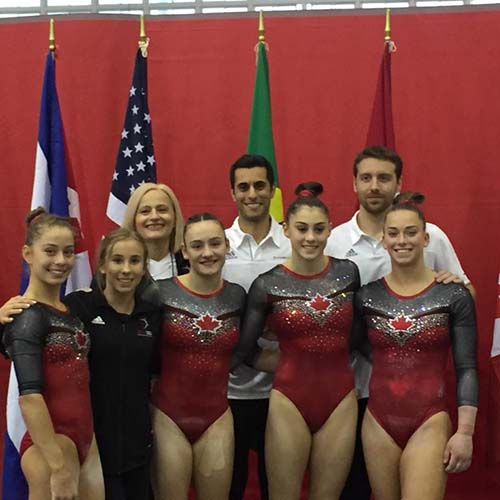 LIMA, PER (September 16, 2018) – On the final day of competition at the 2018 Senior Pan American Artistic Gymnastic Championships in Lima, Peru, Canada finished fourth in the women’s team final and fifth in the men’s event.

“I’m very happy that after yesterday, the girls were able to pull themselves together and put their best foot forward today,” said team coach Dorina Stan. “Not everything went as planned and there were a few mistakes, but they didn’t give up and they fought until the end. I believe it was very tough for them losing Haley in the qualifying competition, but I’m really proud of them and their performance.”

“The team final always tests the athletes with all scores counting. The new format of teams alternating works well and provides direct feedback to the athletes, coaches, and spectators,” said Eddie van Hoof, Men’s Artistic Gymnastics National Team Coach for Gymnastics Canada. “I felt the team worked well together and had solid performances on parallel bars and high bar in particular, unfortunately, errors during the first two apparatus cost us today. The results give us areas to focus on in the weeks leading up to the World Championships.”