The first time you see yourself depicted larger than life on the side of a train, it sort of stops you in your tracks. 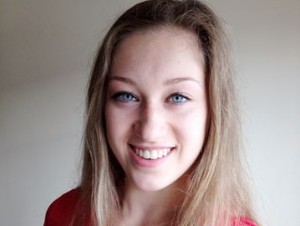 There you are, for all to see. It has to be surreal.

“It was pretty cool,” said Carmen Whelan, who saw herself passing by on a GO train one day last winter in Scarborough. “I never expected to see it. I was like, ‘Wow!’

“I’m trying to find (the train) and get a picture with it.”

For Whelan, 16, whose image also shows up on TTC vehicles and other advertising promoting the Toronto 2015 Pan Am/Parapan Am Games starting next month, it is one of the perks associated with being named to the Canadian women’s rhythmic gymnastics team.

The Aurora resident is the No. 2 Canadian woman behind Patricia Bezzoubenko for the individual competition running July 17 to 21 at the Toronto Coliseum.

A member of the Newmarket-based Silhouettes of York rhythmic gymnastics club, Whelan participated in some Pan Am Games promotional shoots last September. It was a few months later she saw herself passing by on rails. Plenty of other folks noticed, too.

“My friends saw it,” said Whelan with a laugh. “I have strangers sending emails and people saying, ‘You’re that girl!’”

Much of the time, she’s a high school student heading toward Grade 12 at Dr. G.W. Williams Secondary School in Aurora, but for five hours per day, six days of the week, she is training to achieve all she can in her sport, which remains somewhat obscure on this side of the globe.

“She is a late bloomer on to the national team,” said coach Iana Nadtotchii, who has coached Whelan at Silhouettes since the athlete was seven. “She has always had potential.

“That’s the way I like it. What matters is when they are at the senior level. A late bloomer won’t burn out.”

Whelan and the rest of the Canadian rhythmic team depart Tuesday for a three-week training camp in Spain prior to the Pan Am Games. It’ll be a chance to get grounded and work out at high-end facilities.

Then it’s back home to compete in the highest profile event of her young career — and it’s on home turf.

“I can’t wait,” said Whelan, who placed second at Elite Canada and national championships to earn a berth on the squad. “Every athlete says they feel more comfortable having that crowd behind them.

“I’m really looking forward to the athlete’s village. It’s going to be nice to compete and train with World Cup athletes. I’ve made some friends with athletes from other countries, so many of us know each other. It’s nice to know they aren’t trying to tear you apart.” 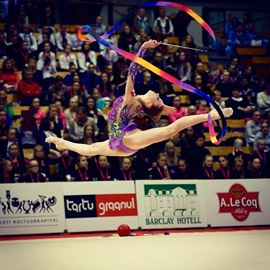 As the No. 2 Canadian, Whelan said the pressure to perform is less than her teammate.

She finished seventh last year at the Pan American championships held at the Hershey Centre in Mississauga.

Their scores will be combined to produce a team result at the Games.

“I’ll just go out and do the best I can,” Whelan vowed. “The training in Spain will help us with the butterflies and take away the nerves. Hopefully, we’ll do well and push for a medal.

“Patricia is a hard worker and a favourite to win gold this year. Hopefully, my contribution is to push her and show I’m ready, too.”

Whelan initially participated in artistic gymnastics. She soon found her calling in rhythmic gymnastics and within three years, she was competing at the national stream level.

“They moved me up right away,” said Whelan, now a 10-year veteran of her sport. “I didn’t enjoy artistic. I was too flexible for the sport.”

She intends to take time off after high school to give herself a fair chance to develop her potential. She would need to be in the world’s top 20 to qualify for the 2016 Olympics in Brazil.

Rhythmic is the gymnastics discipline often overlooked. Combining dance, the use of apparatus including balls, ribbons, clubs, hoops, rope and a free routine, rhythmic gymnastics remains relatively young in the Americas.

“I’m always trying to get people aware of rhythmic gymnastics,” said Whelan. “They think right away of artistic, but once they watch it, they like it. It is unique in its own way.

“I’d love to start something for underprivileged kids,” said Whelan. “So many kids come in with all the talent in the world, but their parents have to pull them out because they can’t afford it. It’s so sad to see.”

Silhouettes member Maya Kojevnikov is also slated to compete at the Games as a member of the group team.