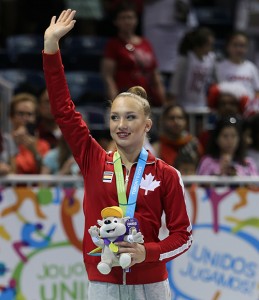 “These games are so amazing,” said Bezzoubenko. “These are the best games so far till this time. I hope I can learn from this competition and move forward to do my best.”

In the last individual competition of the Games, the ribbons final, Bezzoubenko was initially awarded a score of 15.250 which was then appealed by her coach Svetlana Joukova.

“I thought the score was low because I also judge and I am judging the world cup, so I can see what my gymnast does,” said Jouvkova. “I know if she made a mistake, it’s a mistake then you don’t appeal that.

“When she was done her routine, I can’t say everything was done perfectly but the difficulty was done and there was a little bit of a mistake. At the end, I still felt the score was low.”

After review, the judges increased Bezzoubenko’s score to 15.300 which put her in fourth place.

“It’s our sport,” said Bezzoubenko, “it’s our life, so we have to try every day to be better than yesterday. I’m really proud of my performance today. I felt like I had good energy from the audience. Thank you to my coach, I love her so much. And thank you Canada.”

“It was my first Pan Am Games and I am still young,” said Whelan. “I am only 16, so I am happy with my performance.”

“It’s the greatest feeling in the world to be able to medal here in Canada and hear the crowd cheering for you,” said Cameron after the medal ceremony. “Our friends and family are all able to be here, cheering for us. I’m really proud of how we did today, we had a clean routine and that’s what we wanted.”

All of these athletes will now be heading off to Europe to compete in a series of World Cup competitions in August, leading up to the World Championships in Stuttgart, Germany from Sept 7-13 where they will hope to qualify for the 2016 Olympic Games in Rio de Janeiro.