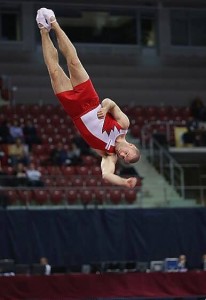 In the double mini competition, Schwaiger placed second with a personal best score of 74.200 points, just one-tenth of a point behind front runner Austin Nacey of the United States who led the field with a score of 74.300 points.

“This year I’ve been playing with new combinations and new techniques to try and get a higher execution score and I’ve been trying out some new skills. In the finals if all goes well, I’m going to try something I’ve never done in competition and I don’t think anyone else has either.”

Schwaiger has been working on a triple somersault in the layout position in training and landed it successfully three times.

In the tumbling prelims Schwaiger placed third behind Nacey in first and Brandon Krzynefski, also of the U.S., in second.

In the women’s senior DMT prelims Tamara O’Brien of Vancouver placed first with 68.400 points, followed by Arden Oh of Calgary with 67.700 and Mariana Aquinio of Brazil at 67.200.

In women’s tumbling Raphaelle Villotte of Montreal and Devon Haimes of Burlington, Ont., were the only competitors, placing first and second respectively.