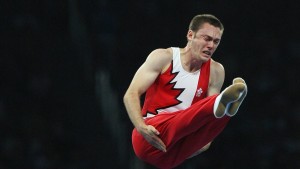 RIO DE JANEIRO, BRA (August 13, 2016) – Jason Burnett of Toronto, ON laid down two solid routines during the men’s trampoline competition in Rio de Janeiro on Saturday but it wasn’t enough to advance to the finals, leaving him in 14th place overall.

“The second routine I struggled to gain stability on those first three bounces getting up to height, and eventually just chose one to take off for that first skill but unfortunately that sent me on a bit of an unstable path so it was a struggle to get to skill 10,” said Burnett following the competition. “I’m pleased that I was able to go out there and do 20 skills and represent Canada’s best.”