Posted on November 17, 2014 by Audra Sederavicius 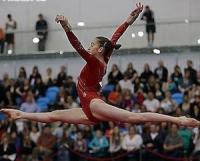 MARSEILLE, France — A young Canadian team ran into some stiff competition at the Master Massilia gymnastics event on Saturday, placing fifth in a field of 10 top international teams.Italy won the gold  with 162.067 points, followed by teams from Russia (161.900)  and Belgium (160.867).Canadian junior champion Rose-Kaying Woo of La Prairie, Que., Shallon Olsen of Coquitlam, B.C.,  Megan Roberts of Toronto and Audrey Rousseau of La Prairie, Que., combined for a score of 156.633.

“It was a very tough field but our team came up with some great individual performances,” said Canadian coach Lawson Hamer of Toronto.

Roberts qualified for both the vault and floor finals on Sunday while Olsen and Woo advanced to the vault and uneven bars finals.

Meanwhile at the age group world trampoline and tumbling championships in Daytona Beach, Florida, Rachel Tam of Toronto came up with the best Canadian result of the day, placing fourth in the women’s trampoline final for 15 and 16 year olds.

Sophiane Methot of Montreal, who won a silver medal on Thursday in the synchro event, placed eighth.

In the tumbling finals in the 17-18 age group, the top Canadians were Raphaelle Villotte of Montreal and Huston Browne of Mississauga, Ont., who placed fifth and seventh in the women’s final.