Posted on November 18, 2014 by Audra Sederavicius 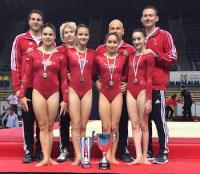 MARSEILLES, France — Rose-Kaying Woo of La Prairie, Que., led Canada to the silver medal in the team competition and placed second in the individual all around event on Friday at the Massilia Open gymnastics event.
Woo, the reigning Canadian junior champion, was runner-up in the all around with a score of 53.200 points.

Giada Grisetti of Switzerland topped the field of 17 gymnasts with 53.767 points.

The Canadian team competes again in the Masters event on Saturday.

Results:
All Around
Team