Posted on April 9, 2018 by Audra Sederavicius

Big Congratulations to Team Canada for their successes at the 2018 Commonwealth Games. Ontario’s Jade Chrobok(Gemini) competed as part of Team Canada.

More news coverage including the post below can be found at http://www.gymcan.org/news

GOLD COAST, AUS (April 6, 2018) – The Canadian women’s artistic gymnastics team rewrote the history books on Friday at the 2018 Commonwealth Games taking home the gold medal in the team event for the first time in 28 years. The gold was also sweet vindication for their disappointing fourth place finish at the 2014 edition of the Games. 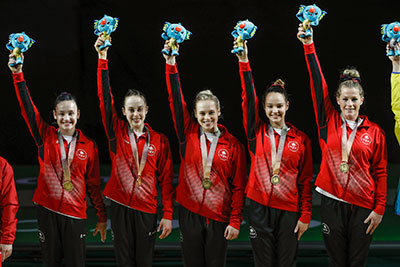 “I don’t we could have asked for a better day,” said two-time Olympian Brittany Rogers of Calgary, AB. “We put it all out there, and I think that’s the most important thing – that we all trusted each other and had each other’s backs, and picked each other up when others fell.”

The team, composed of Ellie Black of Halifax, NS, Jade Chrobok of Toronto, ON, Shallon Olsen of Surrey, BC, Isabela Onyshko of Brandon, MB, and Rogers, finished the night with a total of 163.075, narrowly edging out the defending gold medallists from England who took the silver with a total of 162.650. Team Australia pleased the hometown crowd by taking home the bronze medal with a total of 157.450.

Black, the silver medallist in the all-around at the 2017 World Championships, finished the night as the top qualifier in the all-around competition which runs Saturday evening, despite falling on uneven bars. She also advanced to the vault, beam, and floor finals.

“I think our team did a really good job today; of picking each other up when we made mistakes, gaining those points back for the team, and coming out strong on vault. As a team, I was really proud of us today, and I think we did a phenomenal job despite a few mistakes,” said Black.

Joining Black in the all-around finals will be her Rio Olympic Games teammate Onyshko, who only recently returned to competition after battling injuries over the last several months.

“I had a lot of injuries over the past year and a half – after the Olympics I had some overuse issues in my shoulder, and then a small tear in my Achilles, so just to be out there competing was great,” said Onyshko who also qualified for the uneven bars and beam finals.

For Rogers, who had an unfortunate miss on the uneven bars at the Rio Olympics, laying down a successful uneven bars routine meant much more than just contributing a top score and qualifying for that final: “After catching that release on bars that I missed in Rio, I said to myself, ‘OK, I can retire now!’. But all jokes aside, it was an amazing way to end the competition with all of us nailing our vaults and having smiles on our face. That was the cherry on top.”

Olsen surprised no one by qualifying for the vault finals in top spot, an apparatus she has advanced to finals in at both the World Championships and Olympic Games. She’ll also compete in the floor final.

Competition continues Saturday with the all-around finals featuring Rene Cournoyer of Repentigny, QC in the morning, followed by the women’s competition in the afternoon. The apparatus finals take place Sunday and Monday.