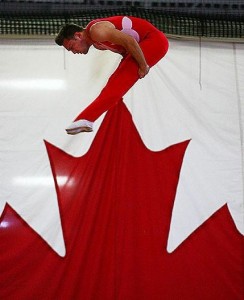 No strangers to standing atop the podium at home or abroad Burnett, 28, and Cockburn, 34, both of Toronto, continued their remarkable comebacks from career-threatening injuries to claim the men’s and women’s individual Canadian trampoline titles.

Cockburn, who won the bronze medal at the Pan Am Games in her first competition since breaking her left ankle just before the world championships last November, topped the women’s field with a total score of 150.750 points to win both the national championship and the open competition which included several international athletes.

Ayana Yamada of Japan placed second in the open event with 148.095 points and Bronte Dundas of Toronto was third at 147.765.

Dundas, one of several younger Canadian competitors hoping to follow in the footsteps of Cockburn, a three-time Olympian, said winning a medal was a bonus.

“I just wanted to do 30 tricks altogether and the medal came as a bonus,” said Dundas who was also coming back from knee surgery.

“It’s a huge inspiration and motivation to train with Karen and Jason because when I’m not feeling great they’re always there to support me and watching them train motivates me to try harder and do bigger skills.”

In the men’s open competition Burnett was runner up behind Luke Strong of Great Britain, but edged Pan Am Games gold medallist Keegan Soehn of Red Deer, Alta., to claim his ninth Canadian men’s title.

Burnett, like Cockburn, struggled at times over the last year coming back from serious injury — in his case major knee surgery to repair ligament damage.

Commenting on the remarkable comebacks mounted by both Cockburn and Burnett, their longtime coach, Dave Ross of Richmond Hill, credited both with their strong work ethic.

“Both Jason and Karen were incredibly professional and diligent about doing all the physiotherapy, and being smart about recovering from an injury and getting enough rest time and doing whatever it took to get where they wanted to be,” said Ross, who also coaches many other top-ranked trampolinists, including Olympic champion Rosie MacLennan and Bronte Dundas.

“Nobody gets good without hard work and both of them are willing to do the hard work. It’s kind of a hallmark of top athletes that they are more determined to be successful than the regular person.”

In the tumbling and double mini trampoline finals, Jonathan Schwaiger of Burlington, Ont., won back to back men’s national titles, while finishing behind Alex Renkhert of the U.S. in the open event in both disciplines.

In winning his fourth straight Canadian tumbling title, Schwaiger successfully completed a difficult new move called a Millar, a triple twisting double somersault that only a handful of competitors in the world are doing.

“I came here with two goals in the tumbling competition, to get my fourth title and do another Millar in competition,” so I’m really happy to pull that off,” said Schwaiger.

“There is definitely room to clean up my passes for sure so I’ll be trying to upgrade that a little further.”

Other Canadian medal winners in the open competition were Nick Jackson of Mississauga, Ont., who took the bronze in tumbling and Kyle Carragher of Vancouver, who also won bronze in men’s double mini.

In the women’s double mini, Danielle Gruber of Kelowna, B.C. won her first Canadian title, followed by Karine Dufour of Montreal and Jordyn Miller-Burko of Toronto in second and third place respectively.

Competition concludes on Monday with the team finals.