Posted on February 20, 2015 by Audra Sederavicius

Yesterday the women’s gymnastics all around final was held and the three favorites going into the competition retained their places from the preliminaries to take the medals.

Winner Rose-Kaying Woo of Quebec performed like a seasoned verteran on three of her four events. Only a fall on beam marred her performance but her difficulty score was so much higher than the field on that event that it allowed her to maintain her 1st place ranking from preliminaries. The 15 year old from Lasalle QC is no stranger to first place, having previously won Elite Canada in 2014 and 2015 and Canadian National Championships in 2014.

Shallon Olsen performed brilliantly on vault and floor to win the silver. At 14 Shallon has been a mainstay of the Canadian national junior team and has performed, and won, nationally and internationally. Her strongest event is vault where she performs a solid Yurchenko double full. She is coached by Vladimir and Svetlana Lashin at Omega Gymnastics in Coquitlam.

Megane Roberts performed brilliantly on floor and vault to take the bronze. She has recently upgraded to a Yurchenko double full, which will help her tremendously. She is coached by Lawson Hamer in East York, Ontario and in 2012 was the national champion.

4th through 8th place were awarded with ribbons and those places went to Helody Cyrenne (QC), Audrey Rousseau (QC) Sarah Posdis-Kowalski (ON), Clair Kaji (BC) and Samantha Borges (ON).

Enya Pouliot of Nova Scotia impressed, especially on beam where she ranked third to move up from her 27th place in preliminaries to finish 15th in the final.

It was inspiring to watch the gymnasts from provinces whose gymnastics programs are still developing. While the level of difficulty was lower than the top athletes, gymnasts from New Brunswick, Newfoundland, PEI and Yukon performed routines to the best of their ability and  showed great enthusiasm and sportsmanship.

Certainly, much inspiration will come from having competed along side some of Canada’s best- and really, that’s the whole aim of these Canada Games- Inspiring Dreams and Building Champions! 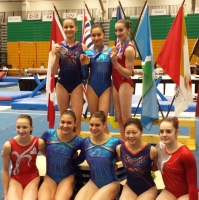