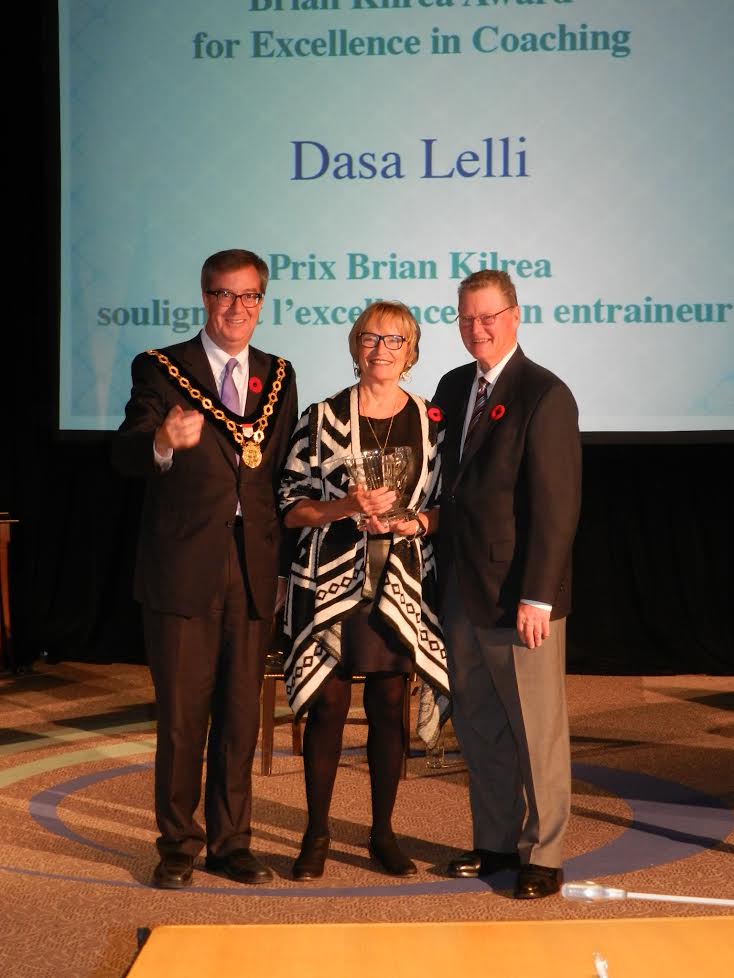 In 2003, in recognition of Brian Kilrea’s 1,000th career victory, the City of Ottawa created the Brian Kilrea Award for Excellence in Coaching to acknowledge the contribution of an amateur coach who best exemplifies the qualities of leadership and commitment that have been the hallmarks of Brian Kilrea’s exceptional career.

In 1975 Dasa Lelli introduced rhythmic gymnastics to the Ottawa region, with the founding of the Kanata Rhythmic Sportive Gymnastics Club under the auspices of the City of Kanata recreational program. As a head coach and founder, she led the not for profit organization into the largest rhythmic gymnastics club in Ontario. The club now provides rhythmic gymnastics opportunities for recreational gymnasts all the way to national level athletes, with over 300 girls and young women participating.

Mrs. Lelli has guided dozens of provincial champions over her 40-year career, as well as providing the early development for gymnasts who went on to compete at higher levels. She has led the club’s participation as part of the Canadian team delegation in the past four World Gymnaestradas. Because of her technical leadership and motivation, the club and its volunteers are recognised throughout Canada as being able to host events and competitions at all levels including the Canadian Gymnastics Championships in 2013 and 2014.

Mrs. Lelli is a role model to two generations of young gymnasts, developing strong moral values, the ethics of hard work, and the importance of fairness and fellowship to team mates and competitors. While expecting technical excellence to the best of the gymnast’s ability, she has created programs for all physical abilities. It is her vision that drives the club’s overall objective of developing strong healthy young women who will contribute to the community in their professional and social lives.

In 2011, Mrs. Lelli received a Gymnastics Ontario Coaching Excellence Award for her leadership, performance and the value of human insight, which are all integral to great coaching.

More information about the award and this year’s recipients can be found on the City of Ottawa website: Order of Ottawa Awards.