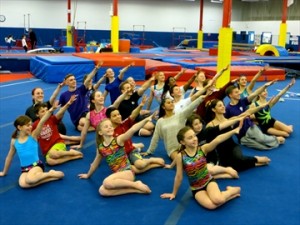 With 25 athletes deep in training mode preparing to represent Canada at the 2015 World Gymnaestrada event in Finland this summer, Toronto Gymnastics International (TGI) is turning to the local community to help give their gymnasts the last push they need to go the distance.

In addition to a series of ongoing fundraisers, the Etobicoke-based artistic gymnastics club just this week launched a crowd-funding campaign aimed at helping to offset the estimated $100,000 price tag ($4,000 per athlete) associated with its first overseas trip to represent Canada on the world stage.

“The team is extremely excited and super focused right now. They’ve put in months of hard work, but now they just need a little bit of extra support so they can focus more on training and less on finding the money to go,” said Lindsay Whiting, TGI’s operations manager.

“We leave in five months, so everyone’s excited and nervous, but they’re doing such an amazing job. It’s really nice to see them all coming together and supporting each other. Watching them cheer one another on has been my favourite part in all of this.”

World Gymnaestrada is a world-wide, non-competitive ‘Gymnastics for All’ event hosted every four years by the Fédération Internationale de Gymnastique (FIG). The event combines gymnastics and dance in 10-minute choreographed group routines, featuring athletes of all abilities and of both genders, aged nine and up.

More than 21,000 participants from 50 different countries are expected to perform in this year’s event from July 12-18 in Helsinki, Finland, making it one of – if not the – largest gymnastics event in the world.

For the team from TGI, which consists of 25 athletes aged 10 to 40, this year will mark their first appearance at the World Gymnaestrada event, after beating out 29 other teams to be selected as one of 15 to represent Canada at a qualifying competition held in Calgary in July 2013.

“We went to Calgary as newbies and the judges basically said to us: ‘Don’t worry if you don’t qualify your first time, just come for the experience.’ But the kids knew I wanted to go to the worlds, and they were with me on that, so they all agreed to work really hard,” said Mireille Stapleton, Team TGI’s coach and choreographer.

“So what a wonderful surprise it was when, at the end of our routine, the judges in Calgary said: ‘You guys did great your first time out – no one ever does that!’ and we qualified. We’ve already made it further than anyone thought we would, so my goal for the team going forward is ‘let’s go to worlds and make an impression.’”

To those ends, Stapleton has crafted a 10-minute routine entitled ‘Waiting…’ that the TGI team has been tirelessly rehearsing for three hours once a week since November.

The routine, Stapleton explained, “explores the concept of hope against adversity and celebrates the most essential element required for human survival,” and is rooted more in dance than gymnastics – a challenge she said her team has risen to beyond all expectations.

“They’re gymnasts, but I want them to look like dancers. For me, the biggest compliment we received from the judges in Calgary was that both the male and female athletes looked like they had substantial dance training, so I want to maintain that,” she said, noting that all gymnasts involved are working extremely hard as a team to prepare for World Gymnaestrada.

“This is a huge undertaking for the team; many of these kids already train 14 hours a week and now they’re training for Finland on top of that. So it would be nice if all of their hard work – all the training, plus all their volunteer work fundraising – will pay off. I’m hoping people want to support us with this crowd-funding campaign.

“For gymnastics, going to the Olympics is one in a million, but with Gymnaestrada, these athletes still get to represent Canada on a world stage, which is a pretty awesome opportunity.”

For 10-year-old Team TGI member Rielle Bonne, World Gymnaestrada will mark her first trip outside of Canada to compete in gymnastics.

“I think the farthest I’ve been before is Ottawa,” she laughed, noting that dad Ryan Bonne is also on the team.

“We’ve been conditioning really hard and learning all the new choreography since November, and we’ve been doing lots of fundraising, too, because we just really want to go to Finland and perform with our team. It’s exciting because we’re representing Canada.”

To help Rielle and her teammates reach Finland by donating to their crowd-funding campaign, go to http://gogetfunding.com/project/tgi-world-gymnaestrada

For more information about TGI, go to www.torontogymnastics.com