Gymnastics For All
Gym For All News
Why Gymnastics?
The Benefits of Gymnastics
Event Calendar
Gymnaestrada

About Us
Gymnastics History
Find a Club

The word gymnastics derives from the common Greek adjective (gymnos) meaning “naked”,by way of the related verb (gymnazo), whose meaning is “to train naked”, “train in gymnastic exercise”, generally “to train, to exercise”. The verb had this meaning, because athletes in ancient times exercised and competed without clothing. It came into use in the 1570s, from Latin gymnasticus, from Greek gynmastikos “fond of or skilled in bodily exercise,” from gymnazein “to exercise or train”. 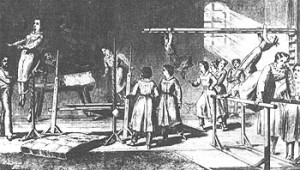 Today thousands of children get a head start in physical literacy by participating in any number of organized programs at clubs and facilities all over the world. The Fédération International de Gymnastique or FIG is the world’s governing organization for all the gymnastics disciplines.

Gymnastics is an ancient sport rooted in tradition that has evolved into one of the most popular activities in the world.