CALGARY — Looking for her 15th national title Karen Cockburn of Toronto topped the field in the women’s prelims Saturday at the 2015 Trampoline Gymnastics Canadian Open. 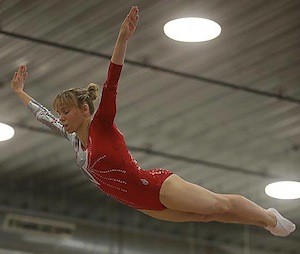 Cockburn, who came back from a broken ankle to win bronze less than a week ago at the Pan Am Games, relied again on her execution to come out ahead of many other competitors with a higher degree of difficulty.

Cockburn finished her compulsory and optional routines with a score of 100.120 points to sit first in a field of 13 competitors.

Ayana Yamada of Japan, one of three foreign athletes competing in the event which combines both the Canadian championships and an open competition, placed second with 97.715 points and Cloe Deschenes of Montreal was third at 97.665.

Pan Am Games gold medal winner and reigning Canadian and Olympic champion Rosie MacLennan of Toronto is taking a break and not competing at this year’s championships.

“It’s always tough to do two competitions back to back,” said Cockburn, a three-time Olympic medal winner.

“I was a little tired and a little sore but I was happy to hit a really good performance. I’m just hoping to continue in the final and do well and to work on increasing my difficulty as I build towards the world championships.”

In the men’s individual trampoline event, veteran Jason  Burnett of Toronto took a solid step towards his ninth national title after placing first among Canadian competitors and second in the open event with a score of 105.850 points.

Luke Strong of Great Britain placed first in the open event with 107.015 points and Pan Am Games gold medallist Keegan Soehn of Red Deer, Alta., was third at 105.500.

Burnett, who just missed the podium at the Pan Am Games in his first competition since major knee surgery last fall, showed he is rounding into form for the world championships this fall in Denmark.

Burnett, who competed with a slightly lower degree of difficulty than three other athletes in the 13-man field, made up for the difference with strong execution.
“It’s a nice confidence boost to know that I can rely on a bit of execution not only difficulty to get me to the top of the list,” said Burnett.

“I would say I’m about 80 percent of the way back with the knee, I don’t have any pain or swelling, but I’m lacking some strength and power. It means that height and degree of difficulty are down but I feel that my form is as good as it has ever been.”

In other senior prelims in the open competition, Alex Renkert of the United States placed first in men’s tumbling followed by reigning Canadian champion Jon Schwaiger of Burlington, Ont., in second and Nick Jackson of Mississauga, Ont., in third.

On the women’s side Jordan Sugrim of Mississauga, Ont., placed first with Erin Templeton of Regina and Raphaelle Villotte of Montreal in second and third respectively.

In double mini trampoline Renkert of the U.S. topped the field in the prelims with Canada’s Schwaiger and Denis Vachon of Burlington, Ont., in second and third.