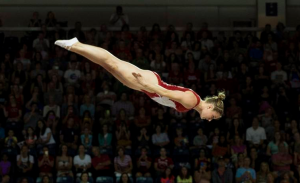 RIO DE JANEIRO, BRA (August 12, 2016) – History was made at the Rio 2016 Olympic Games, as Rosie MacLennan from King City, ON became the first ever trampoline athlete to defend her Olympic title.  She also becomes the first Canadian Summer Olympian in any discipline to win back-to-back gold medals.

MacLennan, who was Canada’s only gold medallist at the London 2012 Olympic Games, sat in 3rd place following the qualification round with a score of 103.130, just over one point back of the leader.

“There was some pressure, there was some expectation, that’s for sure but I don’t think there’s more pressure on any athlete than what they put on themselves,” said MacLennan about qualifying for the finals, “I was really just trying to keep in mind my family, my friends and the journey and how grateful am to even be here.”

In the finals, MacLennan chose not to compete her more difficult routine sticking with what she knew was her more consistent performance. “I held back, I did my easier routine, I was a lot more confident in it. The other one was a little shaky and we knew it would be a bit of a gamble,” said MacLennan following competition. “The Olympics isn’t a time to gamble. I was really happy with how it went.”

When asked how it felt to be Olympic champion for the second time, MacLennan smiled; “It feels incredible. I don’t know how it compares but just absolutely amazing. I was so gracious to have the opportunity to come out and compete among such a strong group of women. I couldn’t be more excited or more proud to have been able to stand on top of the podium again.”

The road to defending her gold medal wasn’t an easy one for MacLennan. She suffered from a concussion earlier in the year and had to work hard to get back to her high performance level. MacLennan’s coach Dave Ross supported her through her recovery and her journey to becoming a repeat Olympic champion. Ross has coached Canadian trampoline athletes to seven Olympic medals, one at every Olympics since trampoline was introduced at the Sydney 2000 Olympic Games.