Posted on February 5, 2018 by Audra Sederavicius 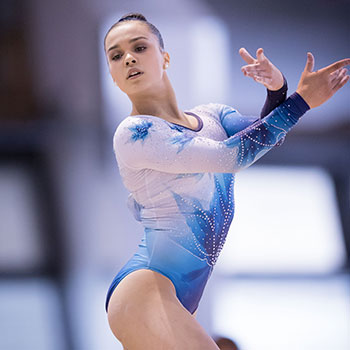 QUEBEC CITY, QC (February 4, 2018) – Dynamo Gymnastics team mates Brooklyn Moors and Emma Spence, both of Cambridge, ON continued to impress during the senior and junior apparatus finals on the last day of the Elite Canada in Artistic Gymnastics competition in Quebec City. Both athletes took home the all-around titles in the senior and junior categories respectively previously in the competition.

Moors is seemingly unbeatable on floor right now, taking the gold medal on that apparatus with a final score of 14.600 – the highest score of the day. She also won silver on beam with a score of 12.200 behind Rose Kaying-Woo of Brossard, QC who captured the gold with a score of 12.734.

“Overall I’m really happy with this competition because we upgraded all of my lines on floor, and I had a  new acro on beam, and a couple of new bar skills, and we didn’t know how it was going to go because they’re all really new. But it ended up going well on the first day, and then today I was really happy because I hit all of my lines on floor and got the highest score I’ve ever gotten on floor so I was super thrilled,” said Moors who is headed next to the prestigious invite-only American Cup where she’ll compete against some of the best in the world.

Rio 2016 Olympian Shallon Olsen of Vancouver, BC also continued her winning streak on vault, taking the gold with a score of 14.300. Olsen hasn’t lost a vault title since becoming a senior in 2016. Victoria-Kayen Woo of Brossard, QC made a triumphant return to competition after taking the last year off and captured the gold medal on the uneven bars with a score of 13.300. World Championship silver medallist in the all-around competition – Ellie Black had a tough day on bars, her only event here this weekend, and finished 7th.

In the junior competition, Spence captured gold on both the uneven bars and floor. Her score of 14.434 on bars was the highest score of the day for the juniors. Spence also took home bronze on vault.

Imogen Paterson of Vancouver, BC finished second all weekend to Spence – she captured silver on uneven bars and floor on Sunday, and finished second in the all-around competition on Saturday.

“I’m really happy with how I did. I just wanted to be able to do everything like I do in training and I did that. I also landed my Arabian double-front on floor which I was having trouble with before so that was a highlight,” said Paterson who is in her second year as a junior and will be looking to compete at the International Gymnix competition in Montreal this spring.

Women’s junior national team coach Alex Bard was pleased with what he saw over the three days of competition from all age groups: “We’re definitely on the way to 2020 – this is our main destination. What I saw this weekend at Elite Canada – we have huge depth of talent and right now it’s small steps in the right direction. The coach’s support, and knowledge, and sacrifice for their athletes, just to come and be the best they can be is amazing.”

A huge congratulations to all the athletes and coaches!

In recognition of all the Ontario athletes who participated: