Posted on March 8, 2018 by Audra Sederavicius 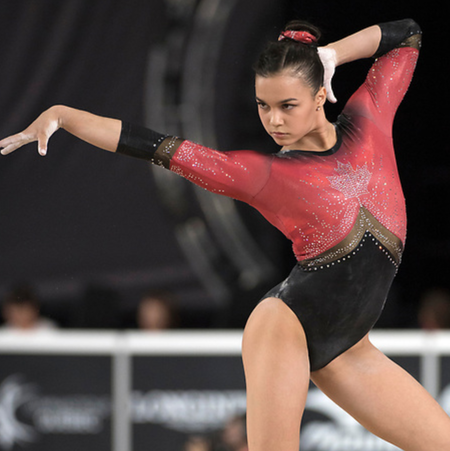 Moors struggled through the competition, making some mistakes throughout her performances but showed her determination and finished the competition with an increased determination to win: “Today didn’t go as planned, but I came to gain some experience and learn from all those mistakes,” said Moors following competition. “I’m going to go back to the gym and fix the mistakes for the next competition because now it just makes me want it more.”

The women’s competition was fierce, with some of the top athletes in the world vying for the gold medal including 2017 World Champion Morgan Hurd of the United States. Hurd was crowned the 2018 American Cup champion with a final score of 56.599.

Moors, a floor specialist, saw her best score and performance of the competition come on that very apparatus, scoring 13.433 points and putting her fourth on that apparatus. Moors also scored 12.433 on vault, 12.166 on bars, and 11.466 on beam to round out the competition.

“Floor was my highlight today, I’ve upgraded my elements since last year at Elite so overall that was the best,” said Moors. “I knew it was going to be a tough competition, but I was just coming here for myself since I don’t have the experience with these routines yet and this big arena so I learned a lot.”

Coach Elvira Saadi supported Moors through the competition and is looking forward to using this experience to drive her future success: “We’ve done lots of difficulty upgrades to her routines and this type of competition is at a very high level and it’s so hard with so many good gymnasts,” said Saadi. “It was a lot of pressure on Brooklyn, but we took the risk and still tried to do well and gained experience and will analyze to improve going forward. She didn’t give up throughout the event and that’s really important. She accepted the mistakes and will look to fix them for next time.”

Moors will take the experience gained at the American Cup and build on it throughout the 2018 season. She is earmarked to compete at the Pacific Rim Championships in Colombia in April before competing at the Canadian Artistic Championships in Waterloo, ON May 22 – 27.