Posted on November 4, 2014 by Ekaterina Kharlip 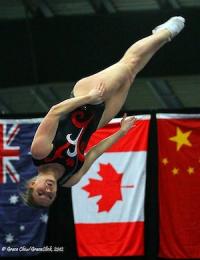 OTTAWA — Olympic trampoline champion Rosie MacLennan of Toronto heads up the strongest women’s team Canada has ever sent to the world championships set to go this year November 7-9 in Daytona Beach, Florida.

Nine world titles, spread over the disciplines of individual trampoline, synchronised trampoline, double mini trampoline and tumbling, are up for grabs in Daytona. The 2014 worlds does not include team competitions, which are only contested during odd-numbered years.

MacLennan, who will be gunning for her second straight world title in the women’s individual event, will be bolstered by three teammates including three-time Olympic medal winner Karen Cockburn of Toronto, competing at her first world championship since 2011 after taking two years off from competition following the 2012 Olympics to start a family.

Rounding out the Canadian foursome are Samantha Sendal of Aurora, Ont., and Samantha Smith of Kelowna, B.C., who finished fifth and 11th respectively at last year’s world championships in Sofia, Bulgaria.

“With the scores they are getting all four of them easily have the potential to be top 12,” says Canadian high performance director Stephan Duchesne of Montreal. “That makes them the strongest women’s team we’ve ever put on the floor.”

Expectations aren’t as high for the Canadian men’s team with injured 2008 Olympic silver medalist Jason Burnett out of action, leaving the door wide open for brothers Keegan and Kyle Soehn of Red Deer, Alta., and Sebastien St-Germain of Montreal to make their mark.

Keegan Soehn, ranked second in Canada behind Burnett, has appeared on the brink of an international breakthrough but has struggled at times with the consistency of his routines.

“He has enough difficulty and the style and height are there, but he needs to have more consistency,” says Duchesne. “It’s time for him to step up, he has the potential and I hope he’ll be able to shine.”

Canadian competitors also hope to make a splash in the non-Olympic disciplines of double mini trampoline and tumbling at this year’s world championships.

Keegan Soehn, one of the few top-level trampolinists competing in both the individual and double mini events, leads the men’s double mini squad, while Tamara O’Brien of Vancouver, B.C., is the top-ranked Canadian in the women’s event.

In tumbling, perennial Canadian champion Emily Smith of Burlington, Ont., will looking to cap her brilliant career with a medal in what will likely be her last international competition while Schwaiger and Vincent Lavoie of Drummondville, Que., lead the Canadian men’s squad.