COIMBRA, POR (July 9, 2016) – Michael Chaves of Oakville, Ontario captured the bronze medal in tumbling at the World Cup in Coimbra, Portugal on Saturday. 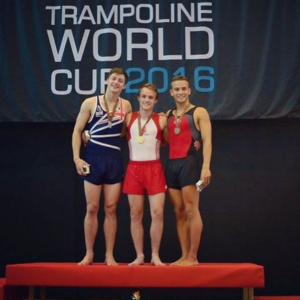 The competition was not smooth sailing for all competitors, with many athletes missing passes, including Chaves, who suffered from a fall during his first pass and lost three points.  Fortunately, Chaves was able to recover and perform a solid pass to cement himself into third place.

“After not being able to tumble for eight months due to a severe foot injury, I came back more motivated than ever,” said Chaves, “I trained very hard for this competition and all of my hard work shows in my results at this World Cup.”  Chaves is first generation Portuguese living in Canada, so this podium finish was even more special; “all my family was born and raised in Portugal, it meant so much to me to come back here and do well. I was able to show what I have accomplished living in Canada while being Luso-Canadian (first generation).” 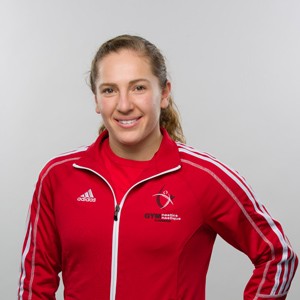 Stephan Duchesne, High Performance Director for trampoline gymnastics at Gymnastics Canada was very pleased with the tumbling performances this weekend, “it was the first time in four years that we have has a male tumbler win a medal.”

Samantha Smith of Toronto, Ontario concluded the trampoline competition in seventh place while breaking the World Record for difficulty (value of 16.2) during the finals.  Smith sat in fourth place after preliminaries, with a score over 100 points for the first time. “I am really happy with how I did,” said Smith, “it was a great way to end off the season.  My goal was to break the world difficulty record and I am proud to have set a new record.” 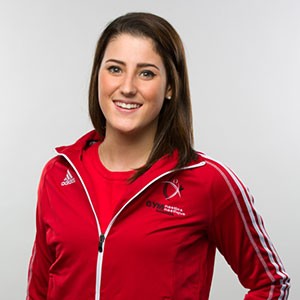 Congratulations to our Ontario athletes representing Canada on the world stage!