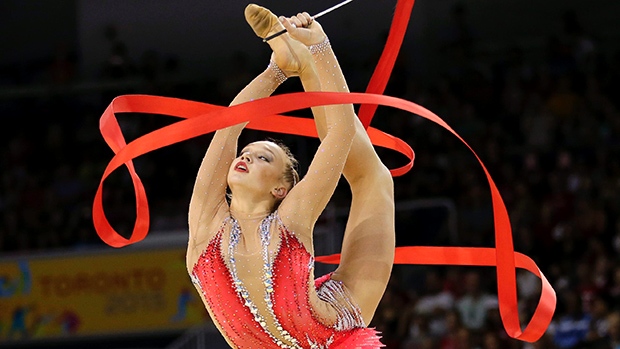 LISBON, Portugal, (March 19) — Three-time Canadian rhythmic gymnastics champion Patricia Bezzoubenko of Toronto (Salut) bounced back after a disappointing start to the season with a strong performance on Saturday at the second stop on the World Cup circuit to place 14th all-around in a field of 33 competitors.

Bezzoubenko, under pressure to get back on course before a last-chance Olympic qualification meet next month in Rio de Janeiro, Brazil, delivered solid routines in all four events, scoring  over 17 points in the ball, hoop, clubs and ribbon events.
“This was the goal and I’m happy to see how Patricia came back with four very consistent routines,” said her longtime coach Svetlana Joukova of Toronto. “In all her routines she had a nice balance between difficulty and artistry.”

Leading up to the Olympic qualification meet in April, Bezzoubenko will compete in two more European events including another World Cup meet in Pesaro, Italy.

“No, I’m not worried about getting tired from too much competition,” said Bezzoubenko, who holds dual Russian-Canadian citizenship and spent the last month training in Moscow to iron out the kinks in her new routines.

“I’m not thinking too much now about the Olympic qualification, just working hard to try and make all my routines better.”

If Bezzoubenko succeeds in winning a berth in Rio she will become the first rhythmic gymnast from Canada to compete at the Games in the individual event since Alexandra Orlando placed 18th at  the Beijing Olympics in 2008.