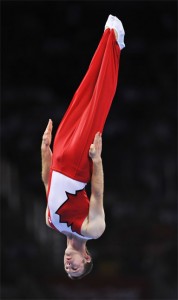 RIO DE JANEIRO, BRA (April 19, 2016) – Jason Burnett of Toronto, ON is heading to his third Olympic Games after capturing one of eight qualification spots up for grabs in men’s trampoline gymnastics at the Aquece Test Event in Rio on Tuesday.

Burnett finished 10th overall in the qualifying rounds with a total score of 104.515 and did not advance to the finals. His second optional routine was particularly strong and scored 5th highest; unfortunately it wasn’t enough to counteract his relatively poor first compulsory routine’s score of 47.545 which had ranked him 13th.

The five highest ranked athletes in the qualification rounds that had not already been allocated spots for the Games, grabbed the first of the eight Olympic Games qualifying spots. The next spot was for continental representation – as all four continents were already represented, the spot went to the next highest ranked athlete which was Burnett. Brazil, as host nation, nabbed the 7th spot, and the final qualifying spot will be determined as part of the tripartite commission.

“I’m very happy with my performance today,” said Burnett. “I accomplished what I set out to do and I can’t ask for anything more than that right now. Dealing with the aftermath of my ACL tear was tough, but we’ve found a number of different strategies that keep my knee happy and strong. Training has consistently been improving and I’m looking forward to improving in the standings in upcoming competitions.”

“We are very happy for Jason locking up the spot for Canada for Rio,” said Stephan Duchesne, High Performance Director for trampoline gymnastics at Gymnastics Canada. “Jason will be participating in his third Games and knows exactly what it takes to perform at the highest level. His resilience should be seen as a model for the other athletes because of the two major injuries he has had in this Olympic cycle. I’m convinced Jason will do everything he can to get the best ranking possible in Rio this summer.”

Burnett will join reigning Olympic champion Rosie MacLennan in Rio – MacLennan qualified her spot at the 2015 World Championships in Odense, DEN last November and was officially selected as Canada’s representative in women’s trampoline following the Canada Cup competition in Kamloops this past February.

Canada’s last chance to expand the gymnastics team heading to Rio takes place Thursday when rhythmic gymnast Patricia Bezzoubenko of Toronto, ON takes to the mat. Her competition will start at 1200 ET.