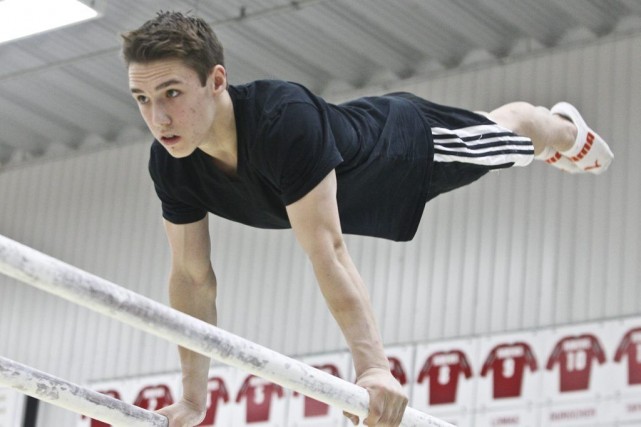 MINNEAPOLIS, February 13 — Sam Zakutney of Ottawa (Ottawa Gymnastics Centre) and Mathieu Csukassy of Montreal led an-eight-man Canadian team with strong individual performances on Saturday going up against some of the top college gymnasts in the United States.

In a meet pitting the Canadian squad against five NCAA teams, including highly-ranked Stanford University and the University of Minnesota, Csukassy placed third all around, just one-tenth of a point out first with a score of 84.650 points.

Justin Karstadt, a member of the Canadian national team who also competes for the University of Minnesota and Ryan Sheppard of Stanford University tied for first all around with identical scores of 84.750.

Zakutney, who moved up to senior competition last year, came away with the best individual result for the Canadian squad, placing first in the floor event in a field of 35 competitors.

Other members of the team were Robert Watson of Coquitlam, B.C., Damien Cachia of Calgary and Samuel Paquin of Montreal.

“Overall the team did very well but the judging was not very kind to us,” said Canadian national team director Tony Smith of Calgary.

“We counted no falls but we still need work on dismount landings.”

Smith is in the final stages of team selection for the final 2016 Olympic qualifier to be held in April in Rio de Janeiro.

Four key members of the Canadian team did not compete in Minneapolis but will be in the lineup for another NCAA meet at Stanford University later this month.

“There is still room for a couple of guys to make the team for Rio so these meets are important to show what they can do,” said Smith.