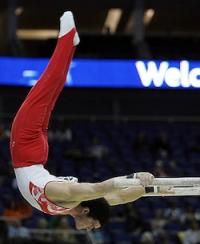 GATINEAU, Que. (May 26, 2015) — Competition is expected to be fierce at the 2015 Canadian Artistic Gymnastics Championships May 28-31 as Canada’s top competitors battle for a coveted berth this summer at the first Pan American Games to be held in Canada since 1999.

Canada’s top two contenders for a spot on the women’s team are two-time Canadian champion Ellie Black of Halifax, N.S., and 2014 world championship team member Isabela Onyshko of Minnedosa, Man. Another six or seven athletes are in the running for the other three spots on the team including 2014 world team member Maegan Chant of Waterdown, Ont., Victoria Woo of La Prairie, Que., and Madison Copiak of Calgary, Alta.

Gymnastics teams at the Pan Am Games are smaller than at the world championships and Olympic Games with five competitors instead of six in both the men’s and women’s events.

“Ellie and Isabela have proven they are valuable to the team and the other contenders are packed really tightly together,” said national women’s team director Dave Brubaker of Sarnia, Ont.

“Leading up to the Canadian championships our strategy has been to get the girls to increase their difficulty and then afterwards we’ll shift the focus to building consistency in their routines as they get ready for the 2016 Olympic Games qualification.”

The Pan Am Games in Toronto from July 10 – 26, will provide a major stepping stone along the road to securing a full-team berth at the 2016 Olympic Games in Rio de Janeiro, Brazil.

In the men’s competition, veterans Scott Morgan of Vancouver, B.C., Kevin Lytwyn of Stoney Creek, Ont., and Jackson Payne of Edmonton, Alta. are the top contenders.

“I expect Scott and Kevin to be key components of the Pan Am team and I’m also expecting some big things from Jackson,” says men’s national team director Tony Smith of Calgary.

“After that it’s going to get really interesting and for the guys on the bubble, a lot is going to come down to how well they do at the Canadian championships.”

Smith is optimistic the men’s team is on the right track after just missing out on qualifying a full squad for the 2012 Olympic Games.

“Some of the more experienced athletes have had some very specific expectations put on them and if they can deliver on those we’re looking really good.”

Competition in the junior events at this year’s championships will highlight rising stars who have set their sights set on the 2020 Olympic Games.

In the women’s event, 2015 all around Elite Canada champion Megan Roberts of Toronto, Ont., leads the way while defending men’s champion Anthony Tawfik of Mississauga, Ont., can expect stiff competition in a strong field including 2015 Elite Canada all around winner Sam Zakutney of Ottawa, Ont.

Competition begins Thursday, May 28th and runs through Sunday, May 31st at the Branchaud-Brière Complex in Gatineau, Que.

Please visit the event website for more information on the event: http://bit.ly/1BcvAek