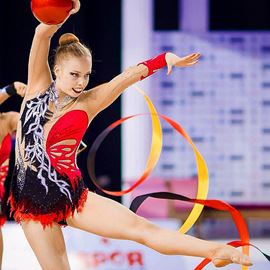 One person’s misfortune can be another’s fortune.

Maya Kojevnikov was chosen to be part of the Canadian senior national rhythmic gymnastics group just more than one year ago when they required a replacement for one of the group members who incurred an injury.

She had a quick decision to make in terms of accepting the invitation and the Richmond Hill resident said she definitely has no regrets.

Remaining an integral part of Canada’s senior rhythmic group this year, the Richmond Green Secondary School graduate will have the opportunity to compete for Canada in the 2015 Pan Am Games competition at the Toronto Coliseum (normally called the Ricoh Coliseum) July 17 to 20.

For Kojevnikov, 18, to be a part of the 2015 Pan American Games in front of her family and friends is a dream come true and ranks right up there with being in the world championships last year.

“I am so excited to be taking part of my first Pan am games this summer,” she said while the club was overseas training in Spain. “Especially with this being in Toronto, where my friends and family are able to come and support us. This is honestly amazing. It’s pretty rare for them to be watching my competitions live because the competitions are usually out of the country.”

Competing in the team event with a group that includes Anjelika Reznik and her sister, Victoria, who both reside in Vaughan, Lucinda Nowell, Katrina Cameron and Vanessa Panov, Kojevnikov feels they have a good opportunity to reach the medal podium at the upcoming Games.

While citing Brazil and the United States will be formidable opponents, she remained optimistic about Canada’s chances of claiming the coveted gold medal.

“In the end, it will all depend on how clean and well executed our routines are,” she said.

Introduced to the sport when she was seven years old through the encouragement of her parents, Andrey and Ludmila, Kojevnikov said she became infatuated with it after taking her first class.

The sport requires individuals or teams of five or more manipulate one or two pieces of apparatus including clubs, hoop, ball, ribbon and rope.

“I don’t particularly have a favourite apparatus. I love all of them because they are each unique in their own way,” she said.

Training with Silhouettes of York, Kojevnikov was quick to note many people have been influential in her budding career which to date, has also seen her Canadian senior group finish fifth in the all-around at the 2014 Pan American Championships, along with claiming silver in three balls and two ribbons and bronze in five clubs.

“My home club coach, Iana Nadtochii, my current coaches, Mira Filipova and Mimi Masleva; they all have helped me to improve and push me to become a better gymnast. My parents have also been on my side since day one and have supported me in my gymnastics career ever since I can remember,” she said.

While looking forward to competing at the upcoming Pan American Games, Kojevnikov said the group will utilize the event as a tuneup for the World Championships in Stuttgart, Germany in September, which serves as a qualifier for Rio.

As long as her group continues to exhibit progression, that’s a step in the right direction.

“Honestly, I feel like the sky is the limit,” she said. “I don’t have a specific goal in mind, although the 2016 Summer Olympics would be amazing. I feel that my team and I just need to do our best and continue working hard every day.”