As a great end of the competition season for Salut RG club based in Toronto was participation in the International rhythmic gymnastics tournament “EWUB Luxembourg Trophy” June 26-28, 2015. This year the Trophy has been recognized by the International Federation of Gymnastics.

The competition in rhythmic and aesthetic gymnastics was joined by 200 athletes from 30 clubs from 12 different countries, and attended by such famous gymnasts as: Aleksandra Soldatova (World Championship Silver medalist) and Veronika Polyakova (all-around bronze medal at the 2015 Russian Championships),   the members of the Olympic Training Centre in Russia and Ukraine, and other stars of world gymnastics.

All the hard work paid off at the end, and Salut RG demonstrated fantastic results: the RG group (4 ribbons) took Silver in overall Junior groups competition – congratulations to Stephanie Pavlov, Vivien Fekete,  Michelle and Sonia Zheleznyakov! In individual competitions, Salut RG’ Gloria Hauer made it to Finals at Junior level A and took Bronze in clubs and ball competitions! Maria Chekhter took 5th overall, 4th in hoop, 3rd in ball at Junior Level B! Fantastic results! 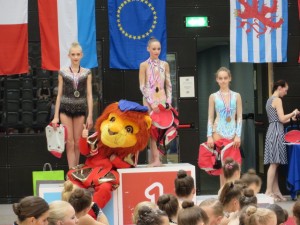 It was an honor for a number of Salut RG gymnasts to attend the EWUB Luxembourg competition as part of the official Gymnastics Ontario Tour Team; the girls have done a great job  – Jacklyne Elias (overall 5th  at pre-Junior level A, 4th in 2 apparatuses) and Selina Chekhter (overall 8th at Junior level A, 2nd in rope). 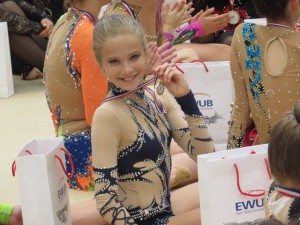 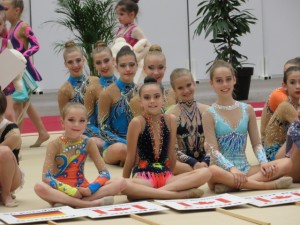