Trampoline team in good position ahead of the final round

After the Preliminary Round of the Toronto 2015 Pan Am Games, members of Canada’s Trampoline Team are in good position ahead of the Final Round. 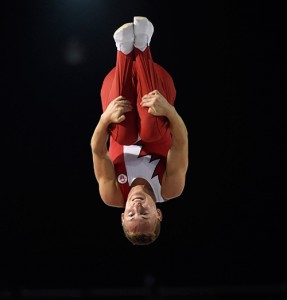 With the women competing first in the evening, both Rosie MacLennan and Karen Cockburn had flawless Compulsory Routines. Karen continued with an excellent Optional Routine, earning her the top position in in the Final Round, with a total score of 97.465. Rosie had a slight misstep midway through her difficult Optional Routine but she finished the Preliminary Round in 6th place with a total score of 70.265.l

Later in the night, the men had their opportunity to compete. Defending Pan Am Games Gold Medallist, Keegan Soehn, bounced to a 1st place position, with a total score of 103.870. Jason Burnett, Canada’s second men’s competitor, had a strong performance with a total score of 101.560, finishing in 4th place position going into the Final/Medal Round.

All of Canada’s Trampoline Team Members will be competing in the Final/Medal Round tomorrow night (Sunday, July 19) at 7:00 PM EST. There will be no live stream but we will be covering the evnt live from our Twitter account.

For full results of the Preliminary Round and tomorrow’s schedule, visit the following link: http://results.toronto2015.org/IRS/en/gymnastics-trampoline/schedule-and-results.htm