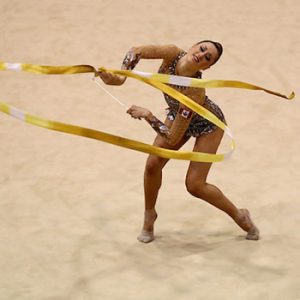 PESARO, ITA (April 9, 2017) – Carmen Whelan from Silhouettes of York in Aurora, ON and Katherine Uchida from Jusco RG in Toronto, ON started their competitive season this weekend at the World Cup in Pesaro, Italy – site of the 2017 World Championships this August.

Both athletes put down solid routines across the four apparatus of hoop, ball, clubs, and ribbons but were unable to qualify for any event finals. Whelan finished 36th with a total score of 54,450, while Uchida finished just behind in 37th place with a total score of 54,300. Whelan’s top score of 14.950 came with her clubs routine – an event where she scored an 18.000 at Elite Canada just last month in Markham.

“I had a rough start this weekend but was able to pull myself together and finish strong,” said Whelan following the competition. “Looking back on my performances I now know what to focus on and how to improve in all aspects of my routines for future competitions. The routines that worked well proved to myself that I can reach my goals and getting positive feedback from the judges just highlights that my hard work is paying off. For the future I’ll focus on consistency and continue to keep a strong positive attitude in training and competition!”

Dina Averina and Aleksandra Soldatova of Russia dominated the competition, finishing first and second in the all-around competition, and taking the top of the podium in all apparatus finals save one.

Whelan and Uchida, along with the national senior group, now head to Baku, AZE for another World Cup from April 26 to May 1, 2017.